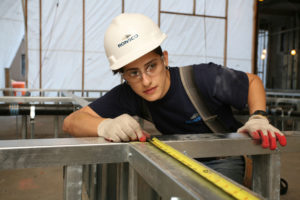 “The big GCs don’t see us creating a lot of value, because they tend to look at subcontractors as commodities,” says Lee Zaretzky, Ronsco president. “But the small and mid-size contractors appreciate our high level of professionalism and expertise.”

Here are 3 reasons why cold-formed steel (CFS) certification has been a boon to the firm.

1. CFS Certification is a Differentiater

At the time of publication, Ronsco was the only SFIA Certified Contractor serving New York City and the surrounding area.

The SFIA Certification Program for Professional Contractors and Truss Fabricators ensures that GCs choose a firm with experience, expertise and a focus on quality.

“Having cold-formed steel framing certification is one less thing a GC has to worry about,” Zaretzky says. “We use it in our marketing whenever we can.”

Zaretzky cites a museum project currently underway in New York City to showcase his firm’s CFS proficiency. The project is an amphitheater with radiused walls.

“The contractor brought us in early to help design, develop and come up with solutions,” Zaretzky says. “Cold-formed steel was one of them.”

Ronsco partnered with a manufacturer that supplies a specialty CFS product. The curved walls weren’t specified to be built using the product. But, by being involved early in the project, Ronsco was able to partner with this manufacturer, which helped design and engineer the curved wall systems.

“In the end,” Zaretzky says, “we offered a cost-effective, better, buildable solution.” 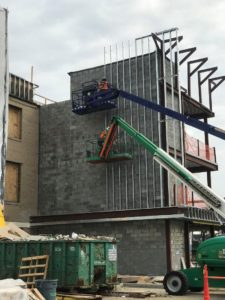 “We convert the framing on many projects to cold-formed steel, a more cost-effective, non-combustible solution than combustible wood framing,” Zaretzky says.

He adds: “Even the old wood buildings are being converted over to steel joists whenever possible. In many instances, we’re able to provide a cold-formed steel solution when higher cost ‘red’ steel is specified.”

“Knowing that a contractor had to meet certain criteria — and supply evidence of cold-formed steel education and proficiency — provides comfort to our customers,” Zaretzky says.

The SFIA Certification Program enables professional contractors and truss fabricators to distinguish themselves by demonstrating proficiency in CFS framing.

Certified firms adhere to the SFIA Quality Management System and Code of Ethics, which ultimately lower costs on projects.

The firm’s accomplishments include:

“Our customers appreciate our expertise and proactive approach, which starts at the pre-planning and bidding stage and progresses through construction” says Lee Zaretzky, Ronsco president.

The company’s executives are passionate about working safely. Ronsco has won three AWCI safety awards and an OSHA Platinum Award. In the last 15 years, the company reported eight years with zero injuries companywide.