“Some construction details cause major conflicts,” said Don Allen, P.E., Director of Engineering, Super Stud Building Products, Inc. Allen knows all about the importance of smart design in cold-formed steel (CFS) construction. He recently presented a Cold-Formed Steel Engineers Institute (CFSEI) webinar on some of those important details and how to adjust the design to make sure a project is completed in a timely, cost-effective manner.

Here are two construction details Allen recommends you look out for — and their solutions.

Detail #1: Requiring studs and deck flutes to line up 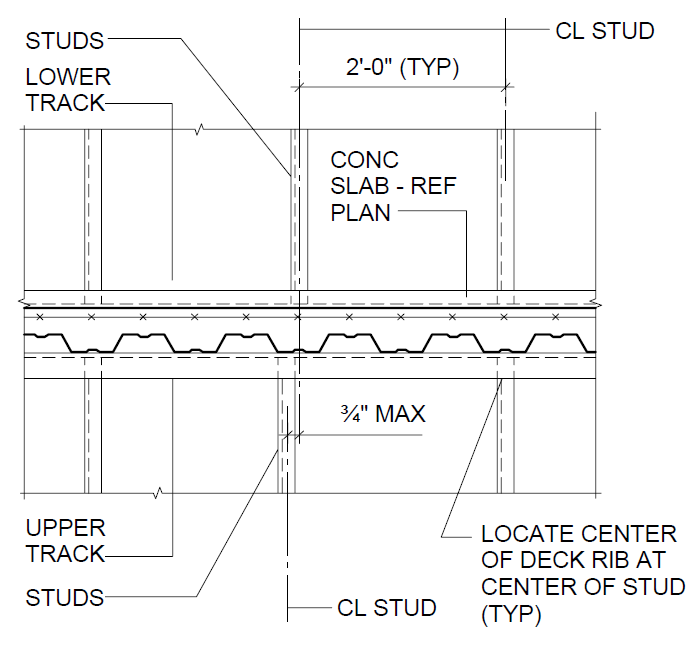 The note at bottom right calls for alignment of the wall studs and deck flutes, which can be unnecessary and costly.

Most building codes require CFS load-bearing studs on different floors to line up with each other. Many structures use poured concrete over fluted metal decks. And so, engineers often write in what they feel is a typical detail: “Locate center of deck rib at center of stud.”

Should the studs between floors and respective metal deck ribs all line up?

Engineers understand the studs on lower floors hold up the studs above them. They know that if a stud pushes up into a metal deck flute, then the deck itself could push back down and crimp the track around the supporting stud.

So, engineers often do what comes easily — they add stud/flute alignment to their specifications, even though doing so adds cost. In most cases, the installer would have to cut some of the metal deck to get them to align. This detail is hard to execute in the field and may be impractical.

The solution is to add a load distribution member (LDM) to the track. Load distribution can involve adding a single stud or a boxed set of studs to the top of the track or adding deep leg deflection tracks to the assembly. Structural steel LDMs may be used with heavy loads.

“LDMs get rid of having to line up the studs and flutes,” Allen said. “They allow loads to spread out over the system.”

Most building codes require CFS studs to line up between floors, unless an engineer designs an alternate system. But LDMs are a great solution. 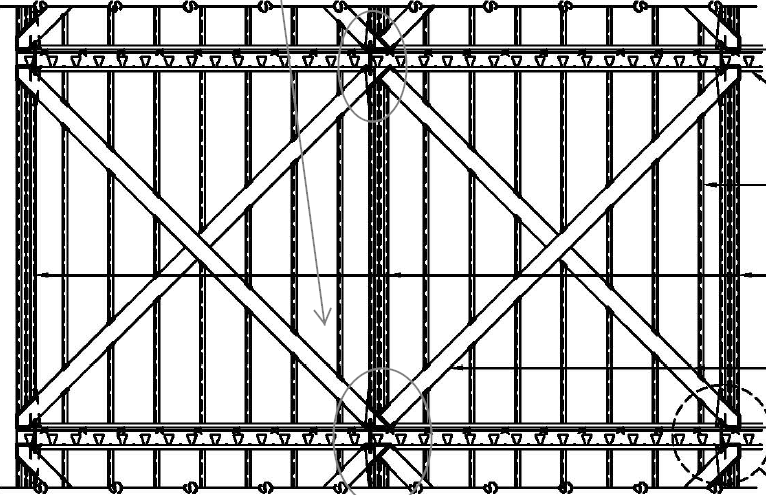 The engineer requires hold-downs at the outer posts and at the center post (oval circles), raising costs.

Engineers add bracing straps to CFS framing assemblies to handle loads caused by wind and seismic forces. But are strap hold-downs needed at every post in the system? No.

“Hold-downs are needed at the right post and at the left,” said Allen about the wall assembly shown in the diagram. “But nothing is gained by adding hold-downs to the center post — just extra costs.”

In this example, the system requires only four hold-downs. But, the designer specified two additional hold-downs at the center post. This raises the cost of materials by 50 percent, not counting the extra labor needed to install them.

Solution: Understand how lateral forces act on your systems

Look at the entire double-braced wall as a single, free body. Imagine hurricane-force winds acting on the above assembly from the top right, pushing the upper level to the left. According to Allen, such lateral load would tend to turn the wall into a trapezoid.

The straps running from top left to bottom right would help resist the wind. One strap would handle half the lateral load, while the other strap bears the remaining load. (The two straps running down to the lower left have no function in this example of wind forces originating from the right.)

Wind pushing horizontal from the right creates load along the straps and down into the floor. This creates compression on the left post and center post. It also creates lift on the right post, which is why the right post needs hold-downs. 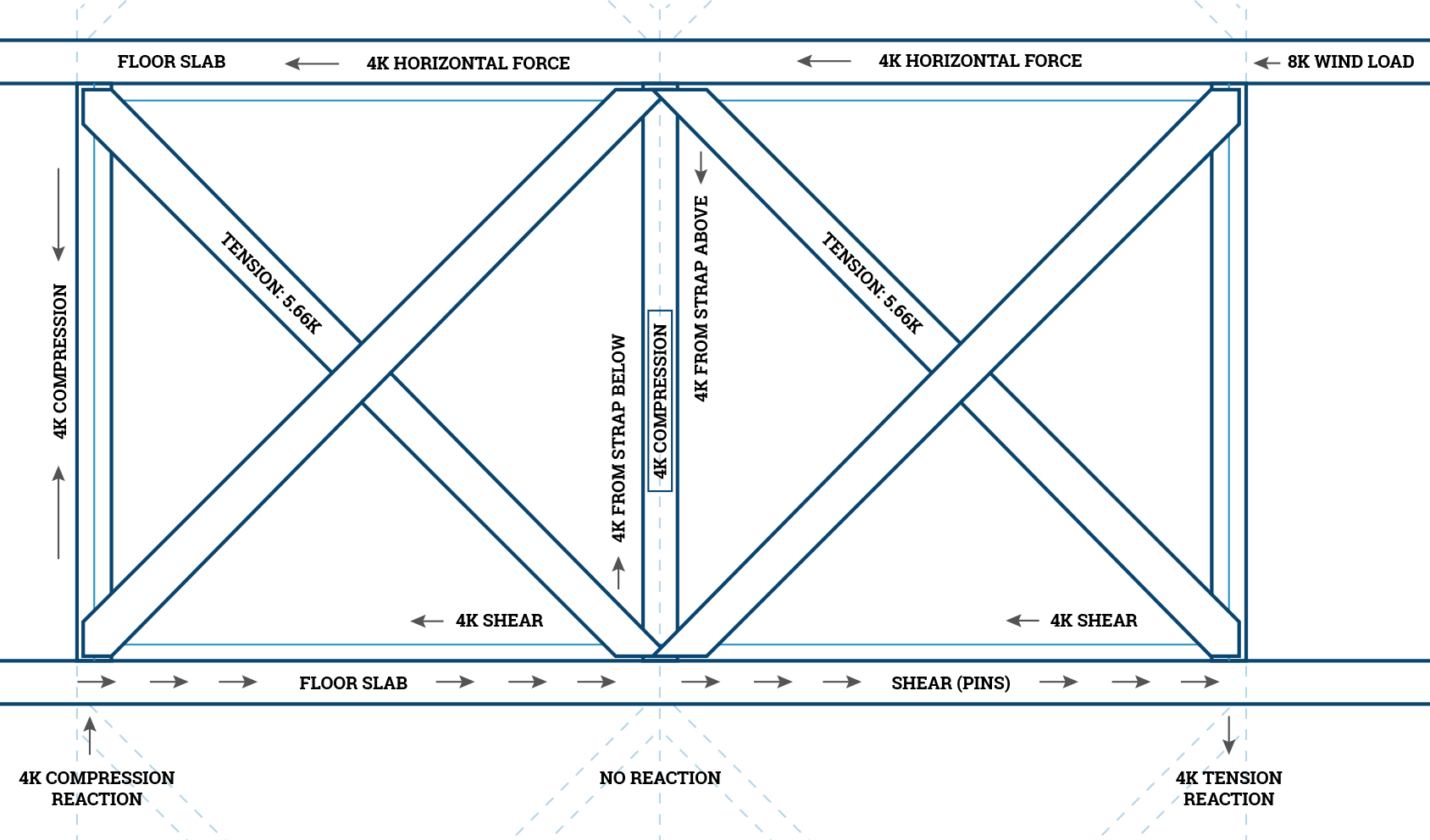 This figure shows why hold-downs for the cross-bracing at the center post are unnecessary.

Hold-downs are not needed for the center posts. The opposite but equal forces from the two straps cancel out, so no lift at the center exists.

One design solution is to run the straps the full length of the shear wall, from end-post to end-post, eliminating the center post. While installation and fabrication issues exist with a longer-strap design, Allen explained that such designs can work.

Every structure is unique and requires understanding of the lateral load requirements for a given area. But, you can likely reduce the hold-downs used on your next project.

Learn more by checking out the latest articles on BuildSteel.

Do have detailed questions about your CFS-framed project? BuildSteel provides complimentary assistance for projects in the U.S. and Canada. Contact us to work through the details of your next project.

eBook: Cold-Formed Steel Framing: Engineering the Details of Your Next Project