The occupants of a building want peace and quiet. How can you engineer subfloors and cold-formed steel (CFS) flooring joists to meet that demand?

The answer involves designing CFS floors with greater mass. You must also take into account joist spacing, resilient channels, vibration breaks, and a few other factors.

But first, you must understand the basics of sound transmission. 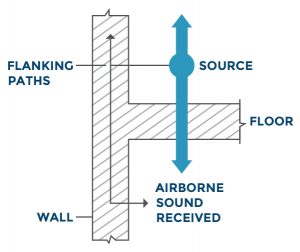 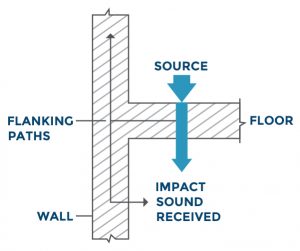 As noted in these diagrams, airborne sound and impact sound are transmitted in two ways:

Mass is the key

According to Hoeller, subfloor mass matters more than anything else in controlling building noise. The heavier the mass separating floors and walls, the better the sound insulation between units. And so, it’s ideal to include as much mass as possible on either side of the joists.

Resilient channels are often installed incorrectly. Contractors may use long screws that drill through the entire resilient channel. That creates a rigid connection — coupling the system and facilitating sound transmission, rather than impeding it.

Sound can travel between adjacent rooms via flanking paths, such as a common floor or ceiling. For this reason, the 2015 edition of the National Building Code of Canada changed. Instead of requiring Sound Transmission Class ratings, it mandates system performance using Apparent STC ratings. (The 2015 International Building Code has only STC rating requirements.)

“[Canadian] designers, architects, and engineers can no longer just look at the separating assembly,” Hoeller said. “They also have to look at the flanking assembly.”

An NRC study, “Apparent Sound Insulation in Cold-Formed Steel-Framed Buildings” (RR-337), sponsored by the Canadian Sheet Steel Building Institute (CSSBI), focused largely on flanking sound transmissions. It looked at different configurations for attaching CFS floor joists to CFS-framed walls and how sound travels between spaces by direct paths and by flanking paths. The biggest finding involved subfloors that are continuous across junctions. To prevent flanking sound transmission, engineers should include vibration breaks in both the joists and the subfloor.

“Cutting the joists at the junctions is much better for sound insulation than having a continuous joist,” Hoeller said.

A variety of CFS profiles, depths, widths, and thicknesses exist in the marketplace. Some profiles have lips, some don’t. Some have proprietary knockout areas. The factor relevant to sound attenuation is web depth, according to Hoeller.

“The deeper the joists, generally the better the sound insulation,” Hoeller said. Joist thickness bears little on noise impedance, he said, so you should focus primarily on the joists’ depth and spacing.

Screws away from the web 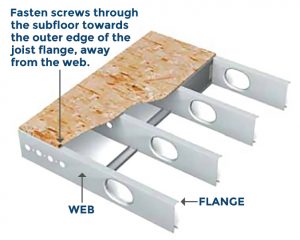 What about fasteners? Where should you place the screws in a joist? Answer: Screw the subfloor into the joist flange as far from the web as you can. Fastening the subfloor away from the stiff part of the joist allows the flange to act as a decoupling element. It can help attenuate some noise.

Other factors go beyond the purview of the CFS flooring assembly, but are worth noting:

Have some peace and quiet

With this knowledge, you can meet your goal of engineering CFS floors for peaceful and quiet interiors. Have further questions about sound attenuation in CFS structures? Ask an expert. Contact BuildSteel for complimentary project assistance.