Inspired by the lyrics and lifestyle of singer, songwriter and author Jimmy Buffett, the $175 million Margaritaville Hollywood Beach Resort is the centerpiece of a revitalization of the Hollywood Beach Boardwalk in Hollywood, Florida. 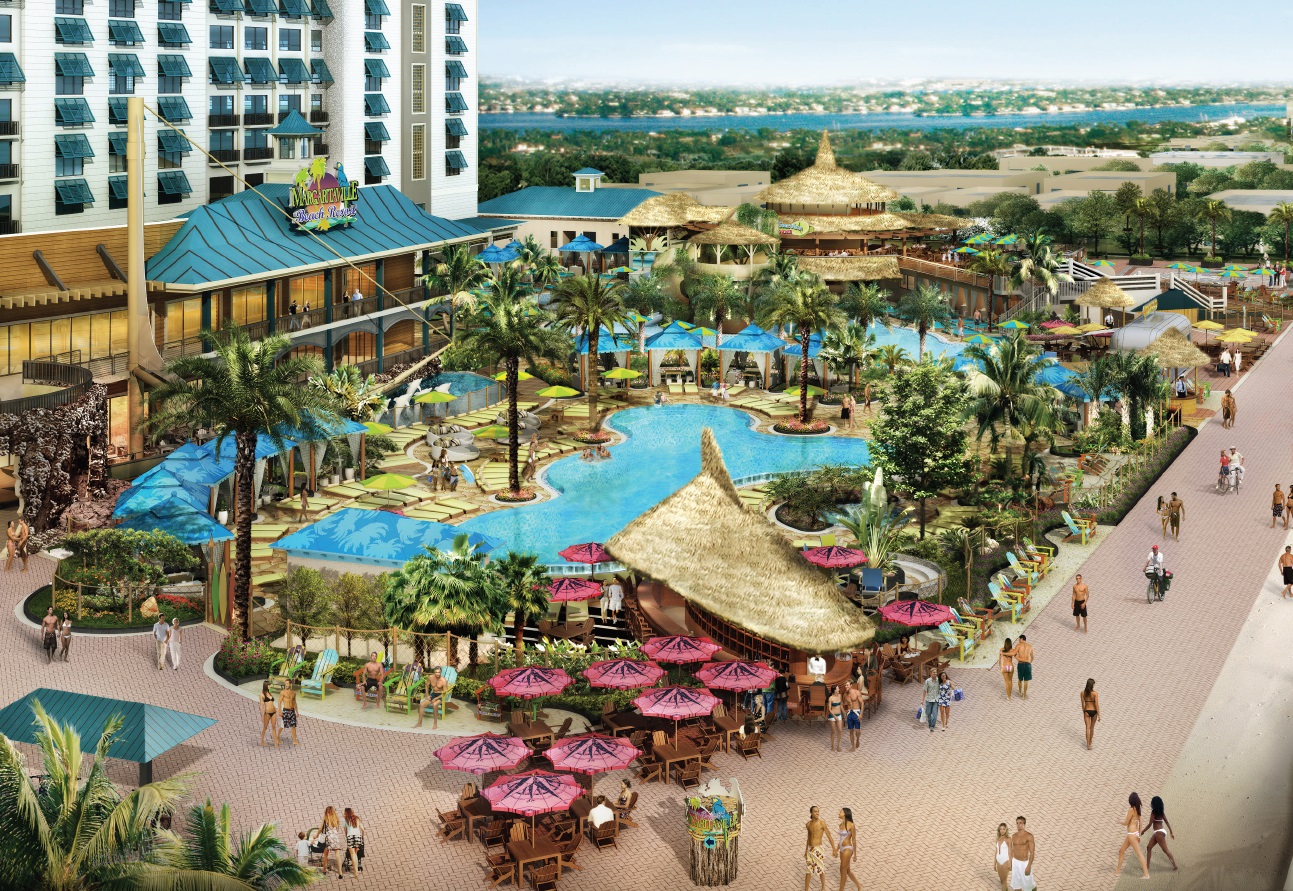 The newly opened, 349-room, 17-story oceanfront resort brings a “no worries” feeling of escape to its guests.

“The LandShark is the most interesting of all the truss structures,” says Kenneth Pagano, P.E., designer and estimator at Sebring, Florida-based Scosta Corporation, the company that engineered and fabricated the trusses for Margaritaville Hollywood Beach Resort.

The LandShark’s interior ceiling is the perfect inverse of its exterior roof profile. To create the effect, Pagano designed parallel chord trusses, each 2-ft. deep.

The unique, tiki-style roof created structural challenges. But these were met by the cold-formed steel’s U-shaped profile and use of double-shear fasteners to efficiently transfer loads and reduce the need to install lateral restraints and bracing.

“The trusses follow many wings and bumpouts,” says Pagano, who used the cold-formed steel manufacturer’s proprietary software to design the system. “Any given truss at LandShark cuts across several different planes.”

Picture a parallel chord truss as it begins at a bearing wall. The top chords and bottom chords angle upward, level off and run flat.

Then, they slope upward some more, until reaching the peak. The truss follows a similar pattern downward to the opposite bearing point. And that’s just one truss running through one section of the structure.

At LandShark, multiple trusses work through multiple planes and together create a tiki-roof shape over a 6,368-square-foot total footprint. 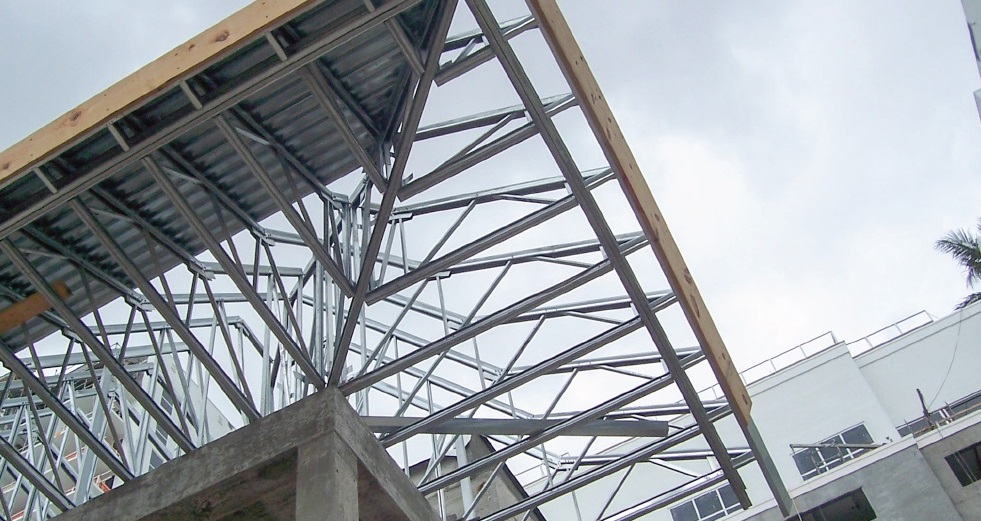 Many roof planes and gables are evident at the Margaritaville Hollywood Beach Resort. “We had to be very creative with our designs,” says Scott Stanley, president of truss fabricator Scosta Corp.

“If it was just a simple hip, it wouldn’t be difficult,” says Pagano. “But this building is many hips put together.”

The result? An open-plenum ceiling that follows the exterior pitch of the roof perfectly.

“Every 12 ft. or so, aligned with a truss, there’s a fake beam in the ceiling,” says Pagano. “It gives the illusion of a tiki bar.”

Another intriguing truss design, this one located at the rear of the Margaritaville resort’s main hotel, cantilevers off that structure to partially cover an outdoor, pool-side dining area.

“The dining area was meant to look like part of a sailboat,” says Pagano. “The trusses adjacent to the sailboat replica form a Polynesian-style roof.”

These cantilevered trusses are large. Consequently, they required multiple connectors fastened properly in place, and thus, extra work to install.

“This was the most difficult truss job I’ve had in 18 years of business,” says Robert Brannon, president and owner of Brannon Specialities, Inc., the Miami-based company that installed the trusses at the resort.

“I think we used just about every connector that TrusSteel makes at Margaritaville.” 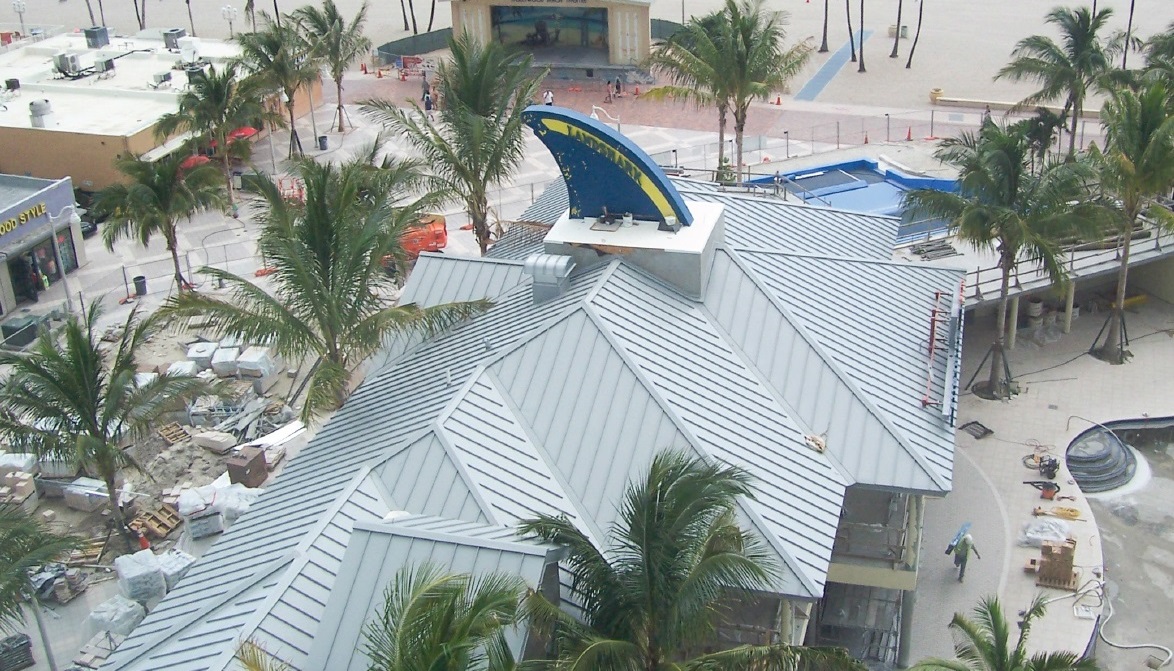 The work turned out well. And both the truss fabricator and installer were able to meet their respective construction deadlines.

“We’re so glad the general contractor and owner are happy with the systems,” says Scosta’s president and owner, Scott Stanley.

In a sense, Stanley’s professional life has come full circle. He has delivered trusses to the very address – 1111 North Ocean Drive in Hollywood – where he delivered newspapers as a boy.

“It’s great to be part of such a landmark,” says Stanley.

Strength and Creative Freedom in a Hybrid Steel Structure