Excavation and slab installation began in April 2017. Construction of the 211  apartments was completed in February 2019. By using CFS-framed load-bearing exterior finish panels, the general contractor began the interior work at the same time the exterior panels were being erected. The developer, McKinney of Denver, opened the property months ahead of schedule. 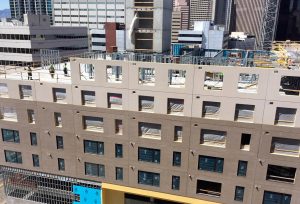 Saving money on construction would not be easy at SOVA. The site had a zero-lot line. Each trade had almost no lay-down space during work. In addition, the trades scrambled to find skilled workers with craft labor supplies limited in Denver.

The design and construction team used these challenges as an opportunity to put prefabrication to the test. South Valley Prefab, Littleton, Colo., prefabricated 483 CFS load-bearing exterior finish panels in its climate-controlled facility. The panels’ specialty finishes were applied in the factory.

“You don’t often see finishes included on cold-formed steel load-bearing panels,” says Travis Vap, president of South Valley Prefab. “We are one of five companies that I know of in the United States that can consistently do this type of work.”

SAVINGS PASSED ON TO CLIENT 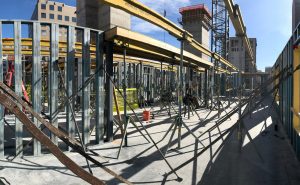 South Valley Prefab’s in-house engineer and design team worked closely with SOVA’s design team. Both teams worked out the panel designs, tested them and settled on a final engineered product.

“One challenge was how to include the finishes for the edge of slab between floors,” Vap says. “In the past, panelizers would leave this off and install it later in a traditional manner. Our panels were 100 percent complete as we erected, so we did not have to come back for any exterior work.”

Vap’s company incorporated multiple trades into one exterior panel system. “We average 75% schedule savings on the building envelope and this adds tremendous value to the project.” he says. 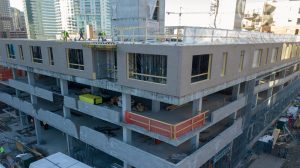 Fabricating and installing finished CFS-framed panels “is not for the faint of heart,” Vap says. It requires lots of coordination and testing, he says, to make it work.

Most subcontractors don’t apply exterior finishes to prefabricated CFS-framed load-bearing panels — at least not prior to their installation — because it’s hard to do. It’s a specialized way of working, Vap says. The advantages are it saves both costs and time.

“You eliminate the exterior scaffolding — the time to erect it, the manpower to erect it and the scaffold safety hazards,” Vap says. “You also free up the other trades to work.”

In traditional podium construction, work below the podium lags behind the work above it by about four months with scaffolding in the way. By adding the exterior finishes during the panel fabrication process, Vap says SOVA’s developer saved months in the construction process. This was evident in downtown  Denver. When SOVA was under construction, three other major projects were also underway in the same area of town. Even though the other projects broke ground before SOVA did, Vap says SOVA was completed three to six months ahead of the others.

“If you look at the time value of money for a developer and getting early access to his building and early rents, we provided a tremendous dollar value in savings for them,” Vap says. “You can’t get that through normal construction, or even normal prefab.”

“This is very impressive, and it’s exciting for construction,” Vap says. “We love building, working with great people and delivering best in class quality products.  Using cold-formed steel, load-bearing exterior finish panels. on multi-family and mid-rise construction is going to make a lot of people happy and become a consistent construction method.”