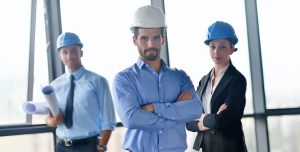 The Structural Engineer of Record (SEOR or EOR) is responsible for the design of the primary structure and possibly, to some extent, to define or prescribe the elements of the exterior enclosure (cladding) system for the structure. The enclosure system may be cold-formed light gauge framing elements, architectural precast concrete, some sort of panelized (either site built or prefabricated) wall system, other systems, or combinations thereof. The Specialty Structural Engineer (SSE) is generally responsible for the final design and installation drawings of the aforementioned exterior enclosure system(s). The SSE is most often retained by one of the sub-contractors supplying the enclosure system.

It is also not uncommon for the SEOR to place somewhat unrealistic prescriptive requirements on the cladding design, such as: “Structural elements at the perimeter of the building have been designed for vertical loads only. Cladding attachments shall not apply moments to the slab edge or lateral loads to steel beams, or introduce torsional loads into steel beams or columns.” (Paraphrased from a recent project’s structural general notes.). Furthermore, the structural General Notes may state, “Braces, added reinforcing, and ties shall be designed and supplied by the contractor [meaning the cladding sub-contractor] for load eccentricities and lateral loads.”

For by-pass cold-formed light gauge steel stud framing – exterior wall framing “passes by” the edge of the slab (for continuity of the framing) – the standard stud clip used to attach the stud to the slab edge creates eccentricities and induces torsions to the slab edge. This is a foreseeable condition for the SEOR. The SEOR should address these common conditions, not push that responsibility to design slab reinforcing to the SSE. Parapet framing and spandrel framing for ribbon windows frequently require kickers from the exterior wall stud framing to either the slab or the spandrel beam bottom flange (or spandrel beam web) to stabilize the wall framing that lacks vertical continuity. This is another condition where the lateral loads and moments induced on the primary structure are foreseeable and should be the responsibility of the SEOR to resolve (design and detail).