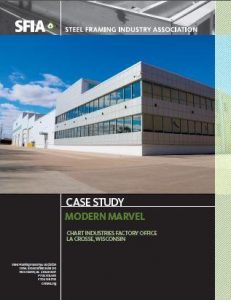 Cold-formed steel framing — used in a 6,000 sq.ft. office renovation at the Chart Industries, Inc., manufacturing plant in La Crosse, Wisconsin — proved to be the perfect wall system to save costs and meet an architect’s design intent.  Specifically, the cold-formed steel system saved about $2.50 per sq.ft. on the exterior walls as opposed to masonry wall construction, says Mike Poellinger, President, Poellinger Inc., La Crosse. He says cold-formed steel was also specified for its durability and flexibility on the project.

“Using [cold-formed] steel allowed us to work with the existing [structural] steel columns and the existing foundation planes,” says architect and structural engineer David Holstrom, AIA, PE, LEED AP of Construction Express Inc., La Crosse. “We blew out the old wall system, put in our steel and set the center lines to work with our exterior metal wall. The [cold-formed] steel framing was flexible. We could set it anywhere we wanted.” Holstrom praises cold-form steel’s ability to integrate with other systems. It allowed him to specify, for example, Knight Wall Systems’ rain screen on the outside plane of the foundation wall. The Knight system is a ventilated facade attachment with a rigid exterior foam insulation and a mineral fiber insulation rain screen. It provides the insulation, vapor barrier and anchoring points for the metal framing. Holstrom says it has a 15-year warranty. “This is a unique project,” Poellinger says. “It’s one of the first cold-formed steel framing projects in our area that has a continuous insulation system applied on the exterior.”

Prefabrication: The Changing Face of Engineering and Construction