The 2017 Tubbs Fire was one of the most destructive wildfires in California history, burning parts of Napa, Sonoma and Lake counties. By the time it was contained, the fire had completely burned an estimated 36,810 acres and destroyed more than 5,600 structures, half of which were homes in Santa Rosa.

One of those homes belonged to Howard and Merritt Booster. SFGATE reported that their home had initially survived the flames. However, the Boosters believe that embers flew into the home’s soffit vents and burned the property from the inside out.

The Booster’s are now rebuilding in a way to avoid a repeat of the disaster. They’re part of a growing number of people building homes with a design and materials to resist fire, SFGATE says.

The Booster’s new home will have a metal roof but no attic or soffit vents. Brendan Kelly of Kelly + Morgan Architects in Napa says the home will be made “impregnable” by using pre-fabricated steel framing wrapped in non-combustible insulation from Canada-based home building company BONE Structure.

The Booster’s new home has a metal roof and was made “impregnable” by using pre-fabricated steel framing wrapped in non-combustible insulation from Canada-based home building company BONE Structure.

“When a very hot, fast-moving wildfire moves through a zone, the point is the building is more secure so it doesn’t allow embers to get into nooks and crannies where they can combust,” says Kelly.

“Eliminating things like vents in a ‘BONE Structure’ house is easy,” he says, “because of the way it goes together with steel and spray insulation.”

John Farrow, president of Farrow Development, is also working to rebuild parts of Santa Rosa. From a mostly commercial general contractor, Farrow now has 80 home rebuilds under construction, including 44 of 46 sites in The Oaks development in Santa Rosa’s Fountaingrove neighborhood. 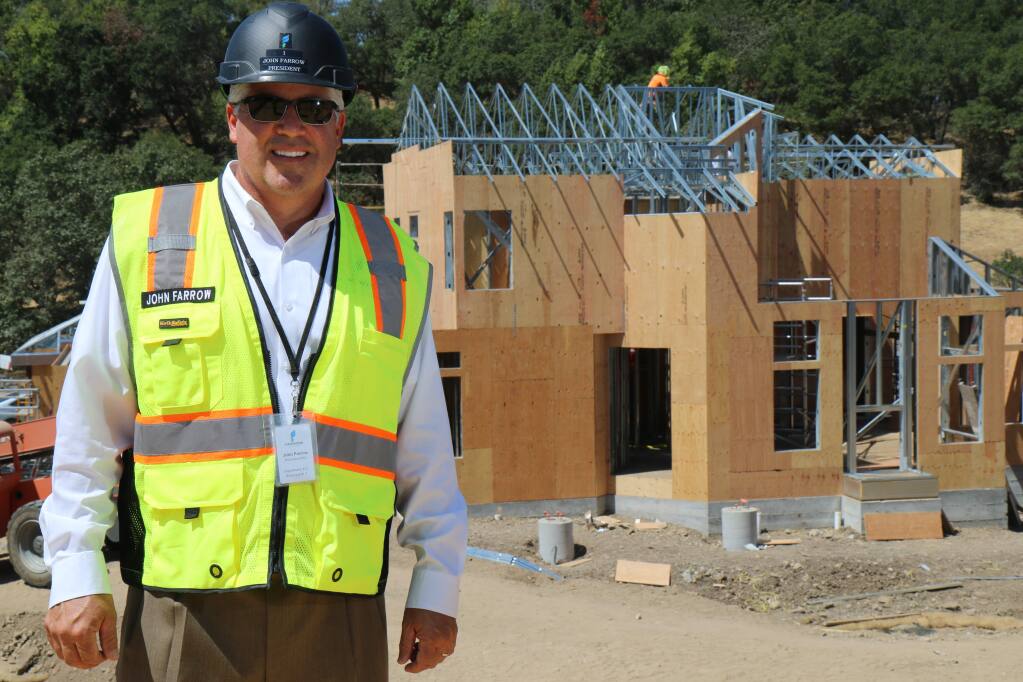 “When the fires hit, it was kind of a wake-up call for us,” Farrow said. “We had done developments in residential and single-family homes before in our past lives and iterations of Farrow.”

According to an article in the North Bay Business Journal, Farrow chose to use non-combustible cold-formed steel framing and stucco finishes for the rebuild.

Steel was picked because of less job-site waste — around 2% for steel versus over 20% for lumber. It was also selected for cost. At the time of ordering, steel framing cost 8% less than wood, Farrow says.

5 Reasons to Use Steel for Fire Safety

Why are homeowners like the Booster’s and contractors like Farrow Development using steel framing? Here are 5 reasons:

Steel remains non-combustible throughout the entire lifecycle of the building — during building construction, occupation and future renovation and repair.

3. Steel-framed buildings lower the fire risk to workers and occupants

Decades of research into understanding the behavior of structural steel components when exposed to fire has given designers the confidence to engineer buildings that will provide optimum fire safety.

Fire resistance-rated walls and floors help limit or slow the spread of flames in a building and maintain the integrity of the structure.

Such fires have challenged the resources of fire services. They have prompted several municipalities to implement site-safety regulations during the construction of combustible buildings that will ultimately increase the construction costs and timeframes of projects. Some cities, such as the affluent Atlanta suburb of Sandy Springs, are working to ban combustible framing above three stories.

How South Africa is Succeeding with Cold-Formed Steel Framing