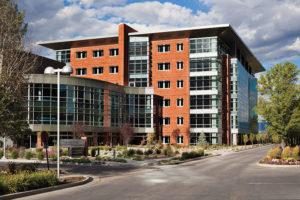 The Cottonwood Cornerstone Center office building complex (Utah) is located in the shadows of the Wasatch Mountains and less than 1 mile from the Wasatch Fault. The office building consists of a six-story steel structure, a three-story lobby connector steel structure (Figure 1), and a two-story parking garage with conventionally reinforced concrete slabs and post-tensioned concrete beams. The engineering design of this elegant Class A office building complex provided some unique challenges due to local soil conditions, high seismic forces, the owner’s desire for a shallow structural depth, a curved cantilevered lobby walkway, and a light gauge steel stud façade framing, supporting expensive imported cut sandstone with horizontal seismic slip joints at each floor.

The façade of the building is a balance of floor to ceiling windows and punched openings surrounded by cut sandstone. There were many challenges in the design of the façade framing which included allowances for vertical deflection between floors due to gravity loads, allowances for horizontal movement between floors due to seismic and wind loads, and supporting the roof overhang framing (often referred to as “The Sombrero” by the design team).

The cut sandstone was carefully selected and quarried from India. The sandstone was a large lead item that had to be carefully coordinated so that material could be harvested and shipped to avoid the monsoon season. Needless to say, great care was taken to design a stiff framing system to protect and support this beautiful stone. A vertical deflection criterion equal to ¾ of an inch was used to design the perimeter beams supporting the stone clad walls. A vertical gap was designed into the facade framing just below each floor at the tops of the floor-to-ceiling window systems. This gap in the facade framing was accomplished using a 2½-inch deep 16 gauge deflection track with a 1-inch gap between the track and top of the stud. The track and wall framing above the joint were attached to the floor slab edge angle and braced back to the steel structure. To allow for vertical movement, it was critical to clarify that the Densdeck must not be attached to the track, but could be attached to the stud below the joint.

A horizontal slip joint was designed into this same detail to allow each floor to move independently during a wind or seismic event. The typical façade framing consisted of 600S162-54 studs spaced at 16 inches on center. The 2½-inch deep track above the joint provides the out-of-plane resistance at the top of each stud. The stud wall with Densdeck below the joint is not attached to the deep track and, therefore, can slide in the plane of the wall inside the deep track.

Building Your Most Cost-Effective Mid-Rise Building