Cold-formed steel framing (CFS) helped a university add 598 beds on campus in just 14 months and meet a critical deadline: the arrival of students for the new school year. Victory Hall, a 163,415-square-foot dormitory at the University of North Texas at Denton, Texas, again proves that designers and builders can use CFS in load-bearing applications and get better and faster results. 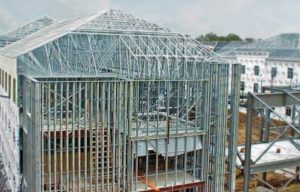 The University of North Texas’ Victory Hall used
load-bearing cold formed steel in the student
residences to shave 25% off the construction time.

Among commercial builders, cold-formed steel has long been a preferred choice for curtain walls and partitions. Such systems are non-combustible, affordable and typically easy to install. But what about for low-rise load-bearing applications? The Victory Hall project needed a structural system — one that could go up quickly within budget.

“The university was interested in meeting a schedule and lowering costs,” says Virgil Strange, President, Axiom Commercial, Denton, and then a consultant to Nuconsteel.

Strange started working the switch to cold-formed steel after construction was underway. “I got to know all the architects and the design-build people at UNT,” he says “One night at a social event, Victory Hall came up in conversation. I learned the university was having trouble with it’s scheduling and costs.”

UNT wanted the dormitory open for the start of the next school year, according to Strange. But making the deadline would be a challenge. Multi-occupancy buildings this size typically take 18 months to build, but it was already June and construction of the dorm was just getting started. 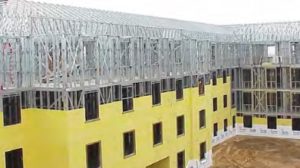 “They discovered infrastructure issues they had not factored into their schedule. It was the time when the price of concrete went sky-high,” Strange says. “The university was behind the eight ball.”

So, Strange set up a meeting. Together, he and Moody presented the merits of cold-framed steel to university officials and the general contractor, Austin Commercial.  Thereafter, officials decided to switch from concrete to cold-formed steel for the load-bearing system.

Moody scheduled panel fabrication and site installations aggressively. “We were working off the footprints of the buildings. The load-bearing walls pretty much followed the spans they had set,” Moody says. “There was some redesign, but it was not a ‘back to the drawing board’ type of a thing. We had our own in-house engineering and were able to do the work.”

Once walls on one floor were installed, the deck for the next level went in place and the concrete subfloors poured in short order. Nuconsteel built wall panels and roof trusses offsite, timing their fabrication to match Victory Hall’s accelerated construction schedule. 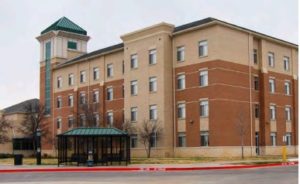 How does the university feel about the project?

“They’re thrilled,” Strange says. “They just love the facade and the strength of the steel, and they got the students in on time.”

According to the student newspaper, the North Texas Daily, a dormitory of this scope would normally require 18 months to build. Victory Hall was completed in 14 months thanks, no doubt, to the use of cold-formed steel.

“We saved money from where they were going to be in concrete,” Strange says. “We also cut the timeframe.”

This case study, provided by the Steel Framing Industry Association, contains additional information on how to meet tight schedules with cold-formed steel framing.