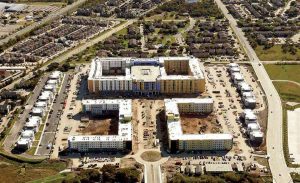 The 3,400-bed facility stretches 2.2 million sq ft, including one eight-story central “Texas-wrap” structure with a parking garage, called the B building.  It is framed with cold-formed steel, and covers 1 million sq ft.

“This is the biggest single-phase student housing project in the country,” says Shane Bauer, vice president with The Weitz Co., design-builder on the project.

RSL Contractors performed work on the cold-formed steel installed in the B building. RSL installed a total of 4,607 tons of steel framing on the project.

“We worked with them extensively, and they panelized almost the entire structure,” Bauer explains. “Every wall and interior perimeter came out on semis as big panels, so it really sped up the project a lot.”

Bob Lyons, owner of RSL Contractors, noted that the structural steel was installed in lines, column to column, with one I-beam running down the center of the rooms to support the weight of the deck and the concrete.

In doing that, “you’re eliminating two layers of rock on load-bearing walls, as some of your interior walls would be double-layered and maybe as much as 8.5 inches wide,” Lyons says.

Manpower was another issue, part of the industry’s “new normal,” Bauer notes.

“When we were buying contracts, we bought the job on a six-day-a-week project and even used Sundays as make-up days, so in that sense, we bought it as a seven-day-a-week schedule,” he says.

The team recruited as many people as possible in the College Station area and in other major cities in Texas, but that wasn’t enough. As a national contractor, Weitz was able to transport people and subs from other states, such as wood-frame contractor US Framing out of Peewee Valley, Ky.

“Some of our subcontractors are actually national contractors who travel with us. A good example of that is Power Design, our electrical sub. They have the ability to bring people from other areas of the country where they can get manpower,” Bauer says. “But at peak we were over 1,000 men and women on the job on any given day. It’s hard to find that amount of people.”

Crews have built the expansive project in just two years, with completion set for later this month. Final touch-ups continue through the end of August as students begin moving in to the buildings on Aug. 19.

Weitz’s team has worked a total of 2.1 million man-hours to date, with a lost-time rate of 0.28. Because of its extensive preconstruction efforts, the project team also managed to deliver half the flats a year early, in 2016, despite having no contractual obligation to do so.

With the influx of a 1,000 workers over the last two years, the project has contributed an estimated $50 million to the local economy through the purchase of local materials and as workers use nearby hotels and restaurants, Myllykangas says. Student rental rates are also trending down because Park West will soon add 3,400 beds to College Station’s 24,000-bed, purpose-built student housing market.

“Nobody has ever done 3,400 beds in a single phase, combined with doing it in two years,” Bauer points out. “There’s a similar project that we’re looking at on the East Coast that’s going to do about the same amount of beds, and they’re doing it in six years.”