The Zulus of South Africa have a proverb about the importance of getting the job done.

Ungexoshe mpalambili, which means, “You can’t chase two antelopes at once.” As you concentrate your energies on one buck, the other gets away. In other words, focus on one target — the best one.

In South Africa, that target is to build residences and commercial structures more efficiently. To do so, more and more engineers and builders are opting for cold-formed steel (CFS) framing systems over conventional building methods.

“South Africa is having success with CFS systems,” said Don Allen, P.E., Director of Engineering at Super Stud Building Products, Inc. In 2012, Allen visited South Africa, where he met with engineers and builders and saw the rainbow nation’s use of CFS framing firsthand.

A great place for CFS framing

South Africa has a variety of climates. Johannesburg feels like a mid-Atlantic city. Durbin is tropical with palm trees. Cape Town is coastal. Mountains comprise much of the terrain.

“I saw beautiful homes with panoramic views from their verandas,” said Allen of his trip to the country.

South Africa’s backlog in housing and resulting need for rapid development make CFS framing extremely well suited for the region, according to Allen. “The frame of an affordable light-steel frame house can be made in hours in the factory. It’s transported to site and erected,” Allen said. “The entire house can be completed in a couple of weeks with very little waste.” 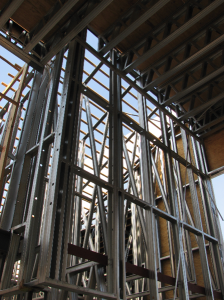 However, there are some differences in how South African designers and builders use CFS. 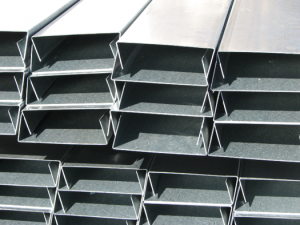 Some structural CFS studs and tracks in South Africa are thinner than structural members in North America.

5 differences in South African CFS use:

Some structural CFS studs and tracks in South Africa are thinner than structural members in North America.

Struggling to rise beyond 3 stories 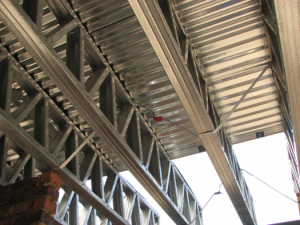 “If we need a floor system with a 14” or 16” deep joist, we call up a roll former to make that joist, but most places in South Africa can’t do that,” Allen said. “They don’t use the heavier roll framer machines that we have in North America.”

“Thicker coils are available in South Africa, but they just don’t have many machines that can handle it” Allen said. “Perhaps in time the South Africans will make use of the techniques we use here to build mid-rise structures seven, eight, and nine stories high using CFS load-bearing framing.”

Allen said that there’s vast potential in South Africa to go higher with CFS by using thicker material. It’s up to the big players in the South African steel industry to do more to promote CFS, he said. 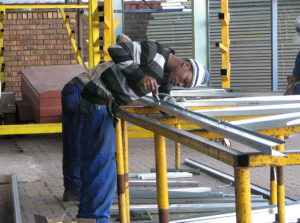 “But I give them credit,” Allen said. “They’ve found a way — even though it’s labor intensive — with small machines to build some decent-span floors, some heavy-duty floors, using cold-formed steel framing.”

“We can learn from the South Africans as we develop new products for the North American market,” Allen said. “By using higher yield-strength steels, tailored to specific applications, we can get greater spans out of products and truss-framed systems, and use less steel in the process, which can help reduce the cost of steel-framed systems.”

Want to learn how cold-formed steel can benefit your next project? Request project assistance.