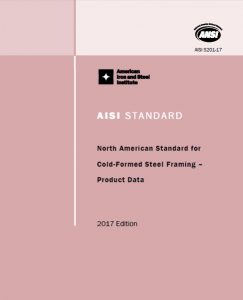 “This new edition is largely the same as the 2012 edition; changes were simply made to update referenced documents and to make the scope of the standard consistent with other AISI cold-formed steel framing standards,” said Jay Larson, P.E., F.ASCE, Managing Director, Construction Technical Program. “The standard is intended to establish and encourage the production and use of standardized products in the United States, Canada and Mexico. The components covered in AISI S201-17 include C-shape studs, joists, track, U-channels, furring channels and angles.”

The Construction Specifier: A Technical Exploration of Aspects Related to Steel Framing