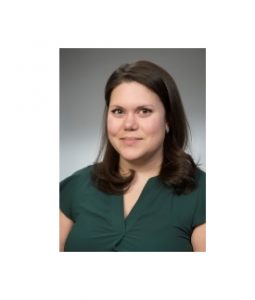 Kara Peterman, assistant professor of civil and environmental engineering, has won the 2018 Norman Medal, the highest honor granted by the American Society of Civil Engineers (ASCE). The award is given for a technical paper that “makes a definitive contribution to engineering science.”

Peterman was the lead author on the paper – titled “Experimental Seismic Response of a Full-Scale Cold-Formed Steel-Framed Building. I: System-Level Response” – which described research performed while she was a graduate research assistant at Johns Hopkins University in Baltimore. The paper was published in the ASCE Journal of Structural Engineering in December of 2016.

Peterman explained that “This paper detailed system-level results for a large shake-table testing campaign of two full-scale cold-formed steel buildings. This work was the first to examine how cold-formed steel building structures perform under earthquakes and further demonstrated that existing design specifications are adequate. The buildings ultimately survived severe ground motions with no structural damage and only minor damage to nonstructural components and cladding.”

As Peterman added, “The work also demonstrated that the structural components designated to resist seismic forces actually share and distribute these forces across the entire building system, and that behavior can only be characterized by considering the complete building system.”