Construction professionals know that buildings need to be able to resist shear forces created by high winds and seismic events. But how those professionals choose to handle those challenges can vary.

How do architects and engineers design and test an effective deflecting system?

“Depending on the project, the designer has to do a stiffness analysis,” said Don Allen, P.E., director of engineering, Super Stud Building Products, Inc. “You calculate how rigid the steel resisting elements are and how rigid the concrete is.”

Allen made this point in a recent Cold-Formed Steel Engineers Institute (CFSEI) webinar entitled, “Devil in the Details: Learning from Mid-Rise Successes and Failures.”

Does stiffness matter? Can lateral loads be shared among structural systems? What is a stiffness analysis? We discuss below.

Most designers specify shear walls at staircases and elevator shafts. The goal is to resist lateral loads for the building during a storm or earthquake. When strong winds or seismic forces push against a building, shear forces make each floor of a structure deflect. Each floor tends to move laterally in relation to the floors above and below it.

Concrete resists lateral loads because it’s stiff. The problem is, poured concrete and concrete block don’t have much give when forces press upon them. Concrete can crack.

It’s the opposite with structural steel and CFS framing. Steel is flexible; it deflects when under shear stress.

Poured concrete or concrete block “flexes” to a degree, so some lateral load will transfer to the structural steel and CFS framing featured in the design. However, it will be hard to get much of the shear load to be absorbed by the steel. That’s due to a simple principle: Load goes to stiffness.

It’s the same with CFS, tube steel, and concrete. Concrete, the stiffer material, cracks before steel. A building’s steel “jiggles” in an earthquake or in a severe wind storm. Stairwells and elevator towers made of concrete block are stiff by design, and builders hope that they can take large shear forces before cracking.

Knowing this, a designer can do a couple of things. He or she can add steel reinforcement to the concrete or place reinforcement inside concrete block. This may help deal with added shear stresses.

But, designers can’t make concrete less stiff than it is. So to help the issue, they can make the steel more rigid. They can do this by adding wood sheathing to the CFS stud shear wall to create a lateral resisting system that can relieve some stress on the concrete. Allen points out that designers want to bear in mind that no matter how much sheathing is added, the steel system will never be as rigid as concrete. 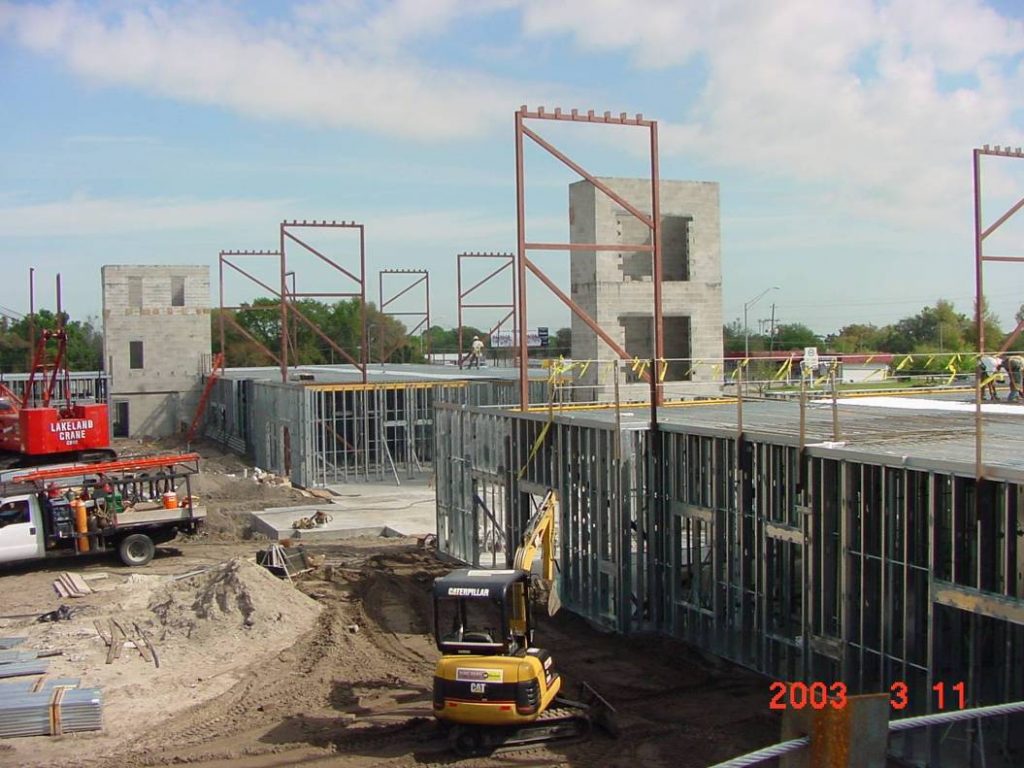 The designer used structural tube steel as a lateral-resisting system to supplement concrete block shear walls at a staircase (left) and elevator tower (right). But, did the designer perform a stiffness analysis?

A stiffness analysis determines how much lateral load goes into a building’s concrete block (or into poured concrete) and how much goes into the structural steel and CFS shear wall framing. It’s a way of calculating how much deflection a shear wall will have.

The above equation helps the engineer know whether the design will resist lateral load. The engineer can adjust variables when calculating ẟ (delta) or deflection.

How do you do the calculations? Using a spreadsheet would take forever. According to Allen, the designer needs to use whole building modeling structural software to calculate the effect of several load combinations on the design.

Allen admits that designers don’t always perform the calculations. But, doing so is important. 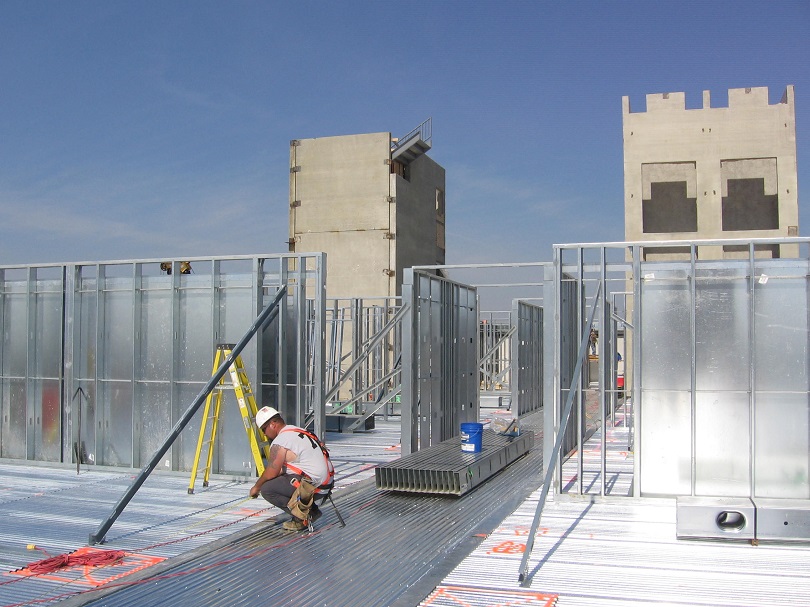 The engineers of this structure did a detailed stiffness analysis. They added CFS shear walls away from the concrete shear resting elements, because of the long, narrow, geometry of the building. The structure is well designed to handle strong wind and seismic loads.

Performing a stiffness analysis may seem overwhelming — but it doesn’t have to be. If you have questions about the lateral load resistance on your next CFS-framed project, or questions related to any other part of the design or planning process, the team of BuildSteel experts can help. Just reach out for complimentary project assistance.

Built to Last: A Q&A on the Future of Resilient Construction