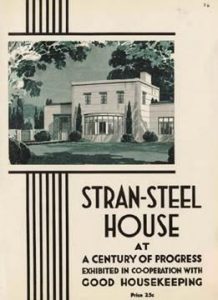 Although many consider cold-formed steel framing to be a “new” construction product, it actually has been used in North America for over 100 years. Use of cold-formed steel members for construction of buildings started in both the United States and England in the 1850s. Use was largely experimental, and limited to a few basic structures. During the 1849 California Gold Rush, A roofer from New York, Peter Naylor, advertised “portable iron houses for California.”

The advertisement stated that the iron was grooved so all parts could slide together. According to the ad, “20’ x 15’ homes could be built in less than a day, were cheaper than wood, fireproof, and more comfortable than a tent.” Mr. Naylor used metal roofing in his practice in New York, so undoubtedly many of the components of these “iron houses” were actually cold-formed steel. In the 1920s and 30s, acceptance of cold-formed steel as a construction material was still limited, since there was not an adequate design standard, and no information on the use of the material in the building codes.

The Construction Specifier: A Technical Exploration of Aspects Related to Steel Framing

The Positives of Cold-Formed Steel Framing