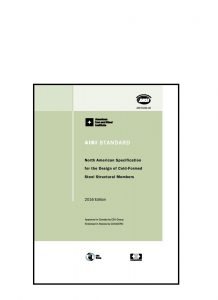 The North American Specification harmonizes cold-formed steel design technology across the United States, Canada and Mexico, allowing for faster introduction of new technologies as well as opening up the market for a variety of derivative products such as design aids and educational materials. The 2016 edition of the Specification has been reorganized―it includes the Direct Strength Method in the main body of the document in parallel to the traditional Effective Width Method; has a similar format to the AISC 360 specification for structural steel buildings; and minimizes the differences in design provisions between the U.S., Canada and Mexico. The reorganized Specification contains a main document—Chapters A through M and Appendices 1 and 2—intended for use by all three countries. There are two country-specific appendices: Appendix A is for use in the United States and Mexico, and Appendix B is for use in Canada. The Specification also provides an integrated treatment of Allowable Strength Design (ASD), Load and Resistance Factor Design (LRFD), and Limit States Design (LSD).

The new edition is designated as AISI S100-16 in the United States and is available online for free download.  In Canada, this edition is designated as CSA S136-16 and is available online for free download. The North American Specification has been approved in the U.S. by the American National Standards Institute (ANSI) as the American National Standard, approved in Canada by CSA Group, and endorsed in Mexico by Camara Nacional de la Industria del Hierro y del Acero (CANACERO).

A History of Cold-Formed Steel

eBook: Building Within Budget: Ideas for Shaving Months and Dollars Off Your Next Construction Project