Jerry Baxter, an owner of the Holiday Inn Express in Hearne, Texas, attests to the benefits of cold-form steel framing. He’s saved money in the hotel’s construction, insurance costs and ongoing maintenance needs.

“After building our first hotel using wood for structural purposes, we decided to try out cold-formed steel,” Baxter says.”The insurance savings were just the beginning of many advantages.”

“We need to find out the facts”

Hearne is located in central Texas in the middle of a triangle formed by Dallas/Ft. Worth, Houston and San Antonio. The town draws visitors, and thus hotel guests, from those metro areas to Texas A&M University, Blinn College and the East-Central Texas oil fields.

The three-story Holiday Inn Express is 37,045 square feet in size. It has 64 guest rooms, an inviting lobby, breakfast area, meeting rooms, back offices and an outdoor pool. Baxter hired Abacus Engineering to design both of his properties. 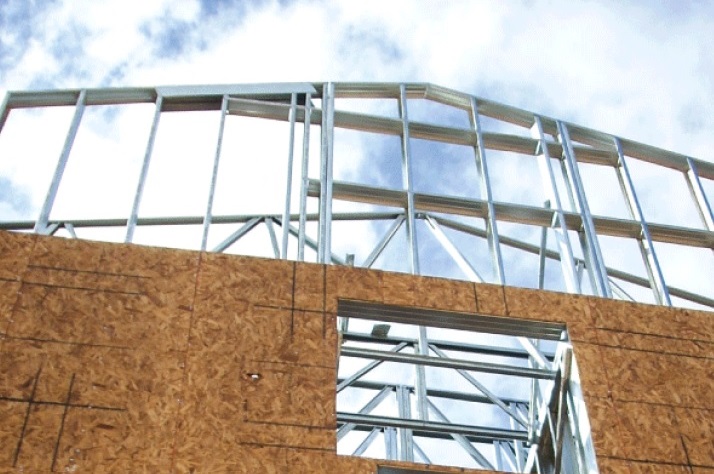 Window openings were framed into the outside walls at a factory, saving time and assuring accuracy of construction.

Nucor Building Systems (formerly Nucon­ steel), Denton, Texas, a division of Nucor Corporation explored the possibilities. This occurred after the subcontractors’ bids and estimates had been accepted and wood material prices had already been factored into the project.

Given the possibility of changing to cold-formed steel construction, many of the subcontractors, including HVAC, plumbing and electrical, all wanted to reevaluate their bids.

“We needed to find out about the facts for pre-fab construction,”Baxter says. “So,we held a meeting in Denton [Texas] with our questions, concerns and skepticism ready to go.”

Nucor presented the costs for pre-fab­ricated, cold-formed steel design. And the subcontractors, one by one, agreed that the pre-fabricated, cold-formed steel construction would not create additional work for their crews. They stuck by their original bids, and the final material and erection costs came in close to the original bid for lumber framing.

Each steel framed wall at the Holiday Inn Express became a pre-fabricated, numbered panel section. The panels were manufactured in Denton and shipped onsite. Plans showed where each panel would be installed and the order of installation.

“The holes and chases for electrical, plumbing and HVAC were already cut at the manufacturing site,” Baxter says. “Window openings were framed into the outside walls. The construction was more precise, accurate and efficient.” 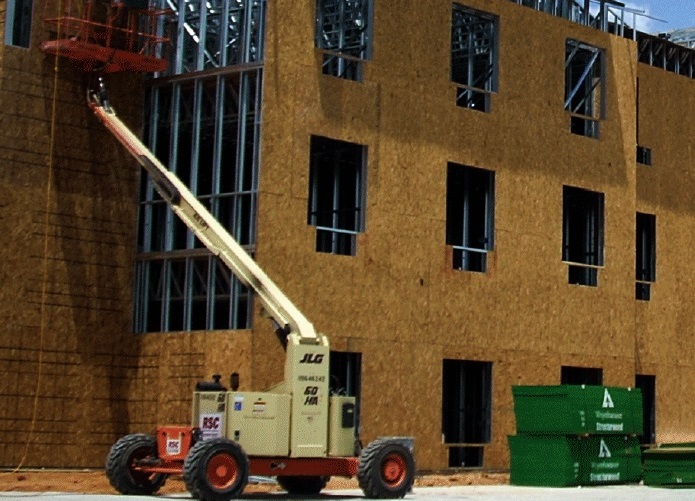 The HVAC, plumbing, and electrical subcontractors all thought they would have to revise their bids in order to go with steel. That proved not to be the case.

Pre-fabricated cold-formed steel joists and rafters proved lighter than their wood equivalents. Thus, less labor was required to handle the material and install the walls, floors and roofs. Since the CAD design and pre-fabrication included the punches and openings, the installers had no need to drill and cut through walls and chases.

“Even the project manager was freed up to focus on other areas,” Baxter says.”He didn’t make constant checks of the cold­-formed steel for accuracy and tolerances, which he’d have to do with wood.”

No Problems with Pests

Operationally, cold-formed steel building has proven a durable choice for the hotel.

“During five years of operation, maintenance costs at the Holiday Inn Express have been minimal,” says Baxter. He says that even on a sound foundation wood framing tends to settle due to its shrinkage, unlike cold-formed steel.

“We’ve had absolutely no issues that involve the property’s structure.” Hearne Hospitality’s risk and property insurance premiums have dropped since, compared to wood, cold-formed steel is non-combustible.It simply does not burn and never contributes to the spread or intensity of a fire.

“Pest control costs are also an ongoing savings,” Baxter says. “Pests can destroy wood, but we have no issue.”

“Absolutely. The advantages of prefabricated, cold-formed steel makes it the best choice for load-bearing framing in sustainable, commercial projects like our Holiday Inn Express,” Baxter says. “I think the cold-formed steel framing was the primary factor in this job’s success.” 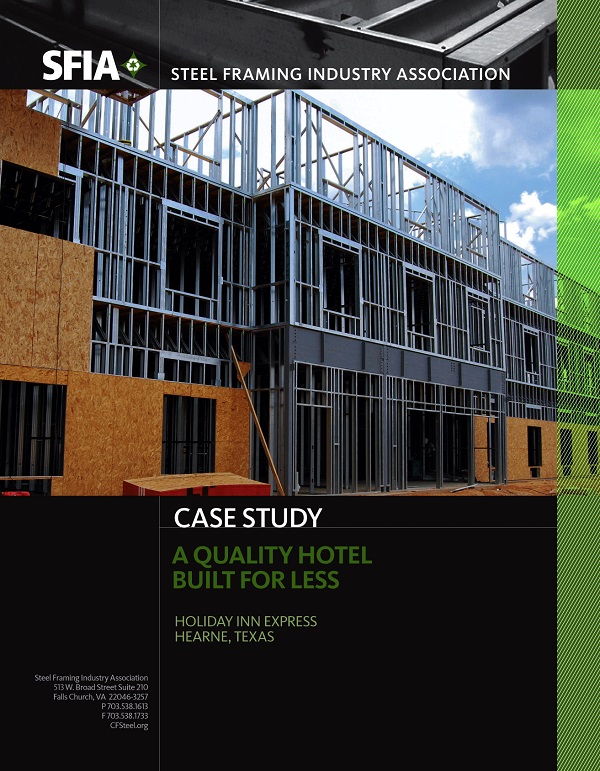