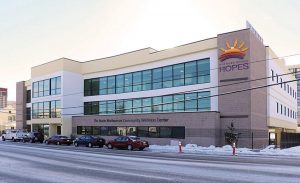 Jackson, an estimator and project manager for Jackson Quality Drywall of Minden, Nev., did just that on the recent Northern Nevada HOPES community health center construction project in downtown Reno, Nev.  The system he ultimately used was ClarkDietrich’s TRAKLOC Drywall Framing System, which can telescope or adjust in length according to variances in the slab. This means contractors can order one length member for the entire project and easily adjust its size as needed without having to stop, measure and cut each stud. This translates into very real time savings for crews, which ultimately means more profits for the install team. Plus, contractors face none of the safety hazards that come with cutting steel studs and they don’t have to fool with nearly as many screws either.