Why build an apartment building with cold-formed steel framing? 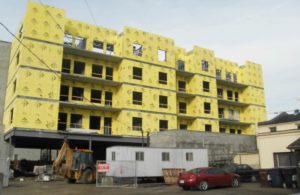 The answer initially for developer Gabriel Kirchberger was that the steel system, being non-combustible, could lower his insurance premiums. As it turned out, cold-formed steel framing did much more. Because the framing system installed quickly, Kirchberger was able to take occupancy of his building and begin its rent cycle sooner. He netted, he says, a total of $100,000 in earlier rent collections.

“The system cut our construction timeline by five to eight weeks,” says Gabriel Kirchberger, President, GK York Management Services Inc., Brantford, Ontario. “I got renters in place much faster than I ever have before.”

In 2010, Magest Building Systems Ltd., Stratford, Ontario, was awarded the subcontract to design, engineer and fabricate the load-bearing cold-formed steel framing for a five-story, GK York apartment building in Brantford.  Magest had worked with Kirchberger before. The company knew GK York viewed itself as a long-term player in the community and wanted a quality structure.

Magest Building Systems panelized the  cold-formed steel walls in its factory and shipped
them to the site.

Colborne Street is five stories high and has approximately 41,000 sq.ft. of space with a total of 40, one-bedroom units. It features a distinctive parapet roof design, an area where cold-formed steel framing saved additional dollars.

“We used a steel truss roof to anchor the decorative parapets,” says Brock Martin, President of Magest Building Systems and Colborne Street Project Manager. “Cold-formed steel lends itself to a variety of roof and parapet designs, making it an attractive building system to owners, general contractors and construction managers.”

Cold-formed steel can deliver unique building features on a tight schedule. Magest crews, for example, completed one floor a week at the Colborne Street apartments, assembling the entire load-bearing cold-formed steel framing in just five weeks. The roof truss system and the parapets called for only two additional weeks.

“We completed every floor at least one week faster than we would have with another system,” Martin says. 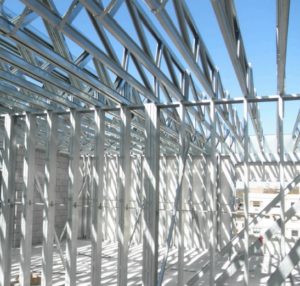 The cold-formed steel roof trusses had a slight
slope designed to save money on the project.

needs and less labor. The developer had worked with Magest on another project specified for wood construction, but that project was upgraded to cold-formed steel framing for its greater durability and
non-combustibilty characteristics. For these reasons, GK York never considered using wood framing on this project.

“There was the added benefit of using cold-formed steel to reduce call-backs due to cracked drywall from lumber shrinkage,” Martin says.

Cold-formed steel brought a number of additional benefits to the Colborne Street project, including one that involved the building’s roof.

“We used hollow core [concrete] floors, as we have on other jobs, but we changed the roof design,” Martin says. “Instead of hollow core, we went with a cold-formed steel truss.
That did two things. It lightened the load on the building, which resulted in reduced foundations. It also allowed us to build slope into the trusses to handle rainwater.”

“We panelized the walls,” Martin says. “We were dealing with things like a tight, in-fill lot and overhead wires in downtown Brantford.” 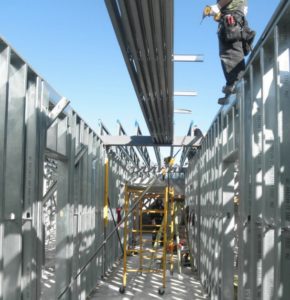 Crews built the cold-formed steel framing system one floor at a time, a floor each week.

Martin says Magest sized the panels so that crews could maneuver them on site by hand. This eliminated the need for a crane to be staged on site for the duration of the project. Instead, the crane would arrive just once a week with the steel and wall panel deliveries. It would lift bundles of wall panels off the delivery truck and place them on a floor area where crews could move them by hand.

“You can design a wall that’s 10 feet tall and 20 feet long, but you can’t get a guy to move it,” Martin says. “If you chop it into smaller sections, then it’s manageable for them, and it doesn’t necessarily take more time to install.”

Thus, wall panelization saved crane costs with no compromise to work speed or quality. It was one more reason why the Colborne Street project proceeded smoothly.

“Because of the steel and Magest’s expedited schedule,” Martin says, “the other trades were able to access the building much earlier than had other construction methods been used.”

With the Surge in Wood Prices, CFS Saves 24%