While 316 Madison is not as tall as the concrete-and-structural-steel building that was originally planned, the final project saved potentially $18 million in construction costs by using cold-formed steel (CFS) framing. In addition, CFS framing gained 50 percent more rentable units versus a proposed wood-framing design. 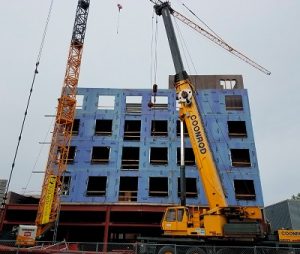 In November 2014, developer CG Hanson Inc. proposed a 15-story structure called “The View” to the Iowa City Council. Specifically, CG Hanson proposed an eight-story design with a request that the city council add seven bonus stories, which the council approved.

“The View” would have been the city’s tallest building, the Iowa City Press-Citizen says. However, its 15-story concrete-and-structural-steel design would not have gone up quickly, nor would it have been cheap. Total construction costs for the structure was estimated to run from $25 to $30 million, says Pete Braun, president of Wall-tech Companies, Madison, Wisconsin. CG Hanson balked at the high price. Wall-tech stepped in to help, Braun says. 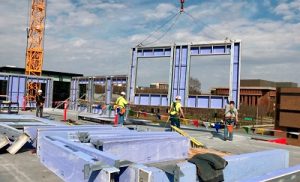 “I thought that the project had fizzled out,” says Brian Menge, vice president of operations, Wall-tech, Inc. “But, they decided to switch to a five-story structure framed with wood.”

While wood framing would save construction dollars, it would reduce the building’s proposed height to just five stories — losing 10 whole stories from the concrete and steel design. However, after Menge made his presentation, the developer and the GC realized they could go higher than five stories by using cold-formed steel instead of wood and have significantly more units to rent. Menge met with Charlie Graves, president of CG Hanson, and his architect in early 2016 to present more details.

“We didn’t want to see the project go to wood,” Menge says. “We helped the owner and the architect change the design to a lighter building. It would be stronger than wood and would be built faster than concrete.” 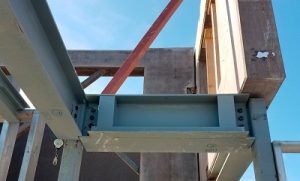 The structural system
involved a hybrid of CFS load-bearing panels and bar-joist steel.

Wall-tech proposed a seven-story CFS-framed structure — six stories of load-bearing CFS would rest on top of a precast podium. This proved to be the superior choice. A five-story wood-framed structure would have cost about $9 million, but would have had only 48 units to rent, Menge says. By going to seven stories with CFS framing, construction would run about $12 million ($179/SF), but the developer would gain 24 additional units over wood — and each unit could draw $1,400 to $2,000 in rent income at current market rates, depending on the unit’s floor plan.

“We could have gone higher,” Menge says, “but a city ordinance required a specific ratio of parking spaces per available units.” In other words, a taller CFS-framed building could have met the ordinance if more levels had been added to the underground parking garage.

CONSTRUCTION TIMELINE CUT IN HALF 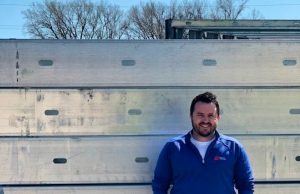 The switch to CFS framing at 316 Madison provided a number of benefits for the developer.

Lighter weight. The location had poor soil conditions. So, by switching from concrete to CFS, the structure cut 60 percent of its weight and thus eliminated the need for robust footings.

Higher quality. CFS provided tighter tolerances and trueness over wood framing, since wood has a tendency to shrink, warp and twist.

Fast delivery. The switch from a concrete structure to prefabricated CFS framing cut the construction timeline in half.

“Compared to the concrete design, we built a lighter and stronger building, and we built it faster,” Menge says.

Wall-tech’s erection crew completed one floor every two weeks from March 1, 2017 to June 23, 2017, Menge says. The structural panels and load-bearing interior walls for six stories were erected in 12 weeks. That included the concrete pours for each floor and weather-related stoppages (due to severe wind conditions) totaling 11 work days. The entire structure was enclosed in less than four months.

“The developer wants to go taller next time,” Menge says. “His partners took notice of the speed of building 316 Madison, and they say bigger successes are yet to come.”