Discussions over how different materials affect the total cost of a building surface and resurface throughout the design and planning phases of a construction project. The building owner’s view of material costs can weigh heavily on the products selected, including the material chosen to frame the structure.

But what is the true cost of the framing material in the final analysis?

The wood industry claims wood framing costs less than other materials. The cold-formed steel (CFS) framing industry, however, focuses on the complete picture and has data to back it up.

A new study conducted by R. A. Smith, Inc., Brookfield, Wis., and sponsored by the Steel Framing Industry Association (SFIA) addresses framing costs on behalf of architects, building owners, and general contractors. The study, “Costs to Build with Cold-Formed Steel Versus a Wood-Framed Building,” establishes that CFS framing and wood framing cost relatively the same when the cost comparison includes the construction insurance premiums associated with using the selected material.

The true cost of CFS over wood is less than 1%: 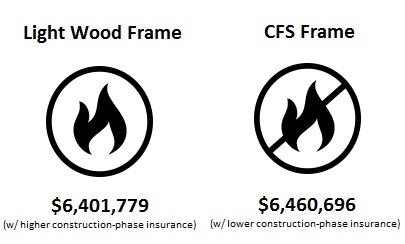 Keep reading, because CFS framing may cost even less than wood framing for a variety of factors.

A new study shows that the comparative costs of framing a 5-story, 49,900 SF mixed-use apartment building should include the cost of construction insurance.

“Costs to Build with Cold-Formed Steel Versus a Wood-Framed Building” examines the cost of two identical buildings. One building design uses wood framing. The other features CFS.

The project was designed with both systems fully engineered and drawn in contract document form. In-place construction costs were determined separately for the total building using both wood and CFS framing for theoretical locations in suburban Chicago, Ill., and Morristown, N.J.

The contract document for suburban Chicago compared only the hard construction costs associated with using the two types of framing materials.

The contract document for Morristown, N.J., included framing costs and an insurance cost impact study of the same building design.² The suburban Chicago building cost figures were adjusted for the New Jersey market to account for geographical differences and inflation, using RSMeans construction cost data and the US Consumer Price Index.

The actual final bid values were used for the total cost of the project as built, with separate breakout estimates provided as indicated in the table below.

Source: SFIA and raSmith, “Costs to Build with Cold-Formed Steel Versus a Wood-Framed Building”

For the NJ project, the “Costs to Build” report cost comparison shows that a building owner saves more than $100,000 in insurance premiums by using metal framing instead of wood. That’s because the risk and cost of premiums are generally lower with non-combustible construction.

If built in suburban Chicago,² the building would cost:

If built in Morristown,⁴ the building would cost:

In both cases, the framing represented about 20% of the total building cost.

What some say is a salient cost difference between two materials proves to be insignificant on closer inspection. The cost variance between CFS framing and wood framing drops to less than 1% when insurance is included in the comparison.

The “Cost to Build” report notes that the choice of framing material affects both (1) the insurance premiums and (2) the maximum coverage limits available to a construction project.

The report adds that a mid-rise wood-framed building may not even be insurable. Furthermore, an owner or a contractor may need to purchase multiple policies to have adequate coverage to construct buildings with combustible materials like wood.

Other mitigating costs, not included in the comparison, could lead to CFS being the low-cost leader. These additional cost factors include:

The “Costs to Build” report suggests that building owners, designers, contractors, and those who develop public policy should consider fire safety when making decisions on framing materials.

In conclusion, comparing solely the initial cost of framing materials, as the wood industry claims, exaggerates one element of material selection. When the total cost of construction is calculated, and the total includes insurance premiums and fire safety, the true cost of a completed mid-rise building can be properly determined.

Thus, the “Cost to Build” report establishes the complete picture between CFS and wood. The cost of CFS framing and wood framing is not significantly different in mid-rise structures when additional cost factors are considered.

² When considering the framing only, the wood and CFS costs were $21.90/sq.ft and $26.50/sq.ft, respectively. The framing thus represents about 20% of the total building cost in each case. The framing included all bearing wall, floor and roof framing members above the podium (2nd through 5th story); 0.6C metal decking with 1-1/2” LWGC at floors 3 through 5, and 1-1/2” B roof deck for the CFS option; ¾” plywood deck for the wood option, with ¾” gypcrete at the upper floors; and all 5/8” exterior sheathing and all interior non-bearing partition framing for both buildings. Interior drywall, ceiling, and finish work were not included in the framing-only costs.

³ In-place construction costs were determined separately for the total building and the framing for both wood and CFS for the suburban Chicago location. Costs were reflective of the end of 2017. The costs are based on pricing from All-Steel Midrise of Richfield, OH for the CFS version, and TK Architectural Design Services, LLC of Milwaukee for the wood framing.

Cost comparisons are affected prices, labor availability, geography, and the economy. Readers should not use a cost report, such as this report, to bid on or make commitments to a specific job. This report provides general insights into the relative costs associated with various methods and materials, and assumes no extreme economic conditions impact material prices, labor, and insurance premiums.

This report is limited to a comparison of the costs between two buildings that only differed in their structural framing material. The structural and nonstructural framing in the floors, walls, and roof were designed using CFS in one building and with wood in the other. The general contractor’s costs were the basis for the comparison (i.e., cost to the owner and not the sales price). The building was eventually built in suburban Chicago although costs will be examined in different locations around the country where the same building could be constructed with little or no design changes.

10 Reasons to Frame Your Next Project with Steel