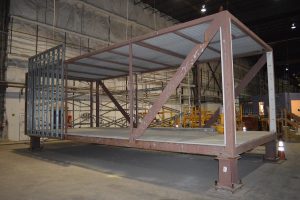 A steel frame moves from workstation to workstation, first being outfitted with cold-formed steel wall panels, then threaded with electrical wiring and plumbing, and finally mounted to a steel chassis to form one wall of a bathroom “pod.” This pod will then be slotted into a larger module comprising a bedroom and kitchen, and the full module will be stacked atop similar modules, forming a multi-level apartment building.

This is what work is like inside Full Stack Modular , a 100,000-square-foot factory in the Brooklyn Navy Yard that builds modular housing — a form of construction where a structure is built in pieces (or modules) in a factory and then assembled at the construction site (also known as prefabricated housing).

“It’s pretty much Legos and Erector Sets,” said CEO Roger Krulak, who founded Full Stack Modular in 2016. “It’s simpler and more effective than what we have now.”

“Pretty much everything in the world people use on a regular basis is manufactured, except buildings,” said Krulak. “We are just trying to steer this industry towards progress.”

The modular housing industry is expected to grow at an annual rate of 6 percent in the United States, and Krulak’s goal is to stay out in front of the competition as prefabrication gains wider market acceptance. Currently, Full Stack Modular is the only modular housing operation in New York City.