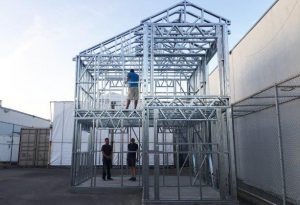 A new company is looking to shake up the traditional wood-frame industry in the Lower Mainland with steel technology and methods from New Zealand.

LifeTec uses FRAMECAD, a cold-formed steel framing system that allows the studs to be completely designed digitally and then formed by a specialized machine.

The data is then entered into a machine that converts steel into wall panel, floor joist and roof truss parts by shearing, punching and roll forming. Assembly teams then screw parts together.

“As far as the construction industry is concerned, it’s creating a lot of time efficiencies, removing a lot of human error and inconsistences associated with traditional construction,” said Jolliffe. “By the time it leaves for the job site it is 90 per cent done.”

LifeTec’s frame structures have just half a millimetre of variance, unlike traditional wood frame, which moves and swells, he stated. This means with steel, workers don’t have to wait to install windows or other items.