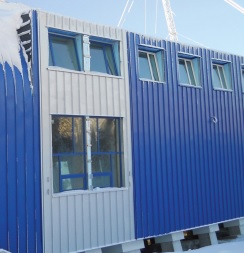 Churchill Manitoba offers one of the most unique opportunities for scientific research in the world. Until recently, scientists housed at the Churchill Northern Studies Centre stayed in a gray, shed-like building with few windows and no visual appeal. “It was an aging facility purchased from the federal government in the ‘80s,” said LeeAnn Fishback, scientific coordinator for the studies centre. Construction began on a new 2,600m2 (28,000 sq. ft.) facility in July 2010 and it was completed in May 2011.

Prairie Architects in Winnipeg designed the building. “It’s been great. The clients were really happy to get out of the previous building they were in,” said Melissa McAlister, Principal Architect with Prairie Architects. McAlister served as project manager for Prairie Architects for the design and construction of the new studies centre. “They’ have been able to market it as a sustainable building, which is important to their clientele.”

Accu-Steel Standing Seam in 76mm (.0299”) prepainted AZM150 Galvalume coated sheet steel, coloured QC18273 Bone White, from Flynn Canada, was used for all four elevations of the building’s roof cladding. The square footage installed was 3,252m2 (35,500 sq. ft.). On the roof and floors 76mm (3”) deep Galvanneal steel deck was used. For the exterior wall cladding, “Electric Blue was chosen specifically to match their Brand colour,” McAlister explained. “They’d spent many years in a gray building and they didn’t want that anymore.” 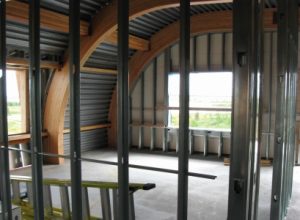 Light Steel Framing was used both in the exterior wall assemblies and interior partition walls, except shear walls. Wind bearing steel studs measuring 1.5mm (.060”) thick by 152mm (6”) were used as infill between glulam columns in the construction of the exterior walls, and 92mm (3.6”) steel studs were used on the interior walls. “Steel was the best material given the climate up there. It’s very cold for the majority of the year, without a lot of sun or daylight. “We needed something that would stand up to the elements,” said McAlister. “There isn’t another material that would allow us to make the shape we wanted with the same durability. They’ve had a lot of problems with (polar) bear vandalism and steel will be more resistant.”

The East side wall of the Centre is a SW250 Profile solar wall supplied by NRG Management, coloured QC 6084 Navy Blue and it is used for passive ventilation heating. Steel was also used for the protective anti-bear bars on the windows.

This article was provided by the Canadian Sheet Steel Building Institute

“We wanted to provide a comfortable, welcoming atmosphere for our researchers,” Fishback said. “The new building has allowed us to expand our operations with much larger laboratories and more comfortable dormitories. It has cut down on our maintenance costs and it proves that you can create a sustainable building in the north. We hope it will encourage others to try a more sustainable way of living.”

Mold-Resistant: One More Reason to Build with Steel Framing