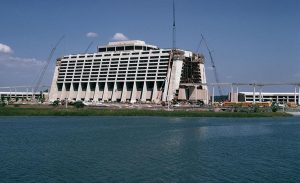 The Los Angeles structural engineer Richard Bradshaw worked with architect Welton Becket, who was collaborating with United States Steel and the Walt Disney Company to build a hotel, the Contemporary Resort, for Disney’s theme park in Orlando.  The three collaborators conceived the hotel, which opened in 1971, to demonstrate the potential for prefabrication in steel construction.

U.S. Steel manufactured the nearly 500 rooms for the building’s main trapezoidal tower in a purpose-built factory on Disney property a few miles from the site. There, workers not only built the individual room chassis—each approximately 9 feet high, 15 feet wide, and 30 feet long—but also installed interior finishes and furniture, including the television set. Once the modules arrived at the site, they were craned directly into the super-structure and hung on cables from its top bracing. To this day, each room is suspended above the still-operating hotel’s central atrium.

Like many prefabrication projects, the Disney hotel had several aims. These included accelerating construction, saving money, and illustrating Walt Disney’s vision of the city of the future. But “this was the end of their experiment,” says Bradshaw. Prefab at this scale did not immediately take off, he says, because of the immense investment needed to establish a nationwide factory network; the lack of predictable, precise execution in the pre-computer era; and relatively low labor costs for conventional construction.

However, the dream certainly isn’t dead. For if the aims of prefabrication in architecture remain the same, the ways in which architects harness its potential now vary widely.

Shaked and Baked But Still Standing