Why should contractors build virtually before erecting anything physically on the job site? Because upfront planning with other trades can creative a positive environment for the contracting team, speed up workflow, cut costs and trim man-hours required to complete projects.

First, let’s talk about the state of today’s CFS joist products. Then, we’ll dive into how to get the most out of coordinating among the trades.

It used to be that to build a floor with traditional C-studs, studs were turned on edge and braced with web stiffeners. You needed stiffeners to carry lateral loads along a horizontal plane. Not only were there lots of parts and pieces, but you also needed a lot of labor to erect the floor assemblies.

All that has changed with the introduction of stiff, proprietary joist products fabricated with large knockouts — holes large enough to run standard-size plumbing and ductwork.

Kick-off meetings work best if the general contractor takes the lead in facilitating communication among the trades. Here’s everybody’s role:

Here’s an example of a successful mechanical system installation done with proper planning prior to the project start. 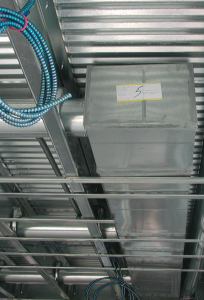 Mechanical system, floor joists and deck aligned and optimized through pre-planning meetings held upfront by the GC, architect, and the trades.

Mechanical system, floor joists and deck aligned and optimized through pre-planning meetings held upfront by the GC, architect, and the trades.

A large HVAC system runs inside the joist bay — parallel with the joist framing. The ductwork is pulled through the knockouts within the floor assembly. All systems are aligned and space usage is optimized. The project features:

To learn more about BIM and determine if it’s right for your next project, download our eBook, “BIM for Cold-Formed Steel Framed Projects: Benefits, Drawbacks, and How to Succeed.”

Exploring the Potential of Digital Technology