Burgundy Drive has an impressive curb-side appeal, a swimming pool and a lift off the main garage to store cars in the basement. It has marble, limestone, copper, wrought iron, slate and other high-quality materials. 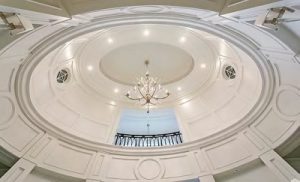 Hidden behind the limestone exterior and the Level 5 interior finish, however, Burgundy Drive features insulated concrete forms and cold-formed steel (CFS) framing as its structural systems. The CFS, in particular, plays a special role. It is the structural framing for dozens of delightful domes, arches, oval-shaped ceilings and other architectural details. 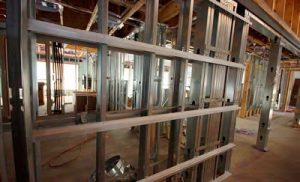 Load-bearing framing on the 16,000-square foot home was completed in just one
month.

Burgundy Drive was completed in 2015. It won the Building Industry and Land Development Association (BILD) Renovation and Custom Home Award that year for good reason. The home is clad with limestone, topped with a slate roof and wrapped with copper eavestroughs and downpipes. Its energy-saving features include home automation, triple glazed windows, an insulated concrete shell, a rainwater cistern that stores water for landscape sprinklers and 8-kilowatt solar panels.

“The owner went for energy-efficient, environmentally responsible materials,” Sliskovic says. “He wanted the best of the best, because he saw value in having the best products.”

The architect specified CFS framing throughout the house, although the roof trusses were framed with wood. The flooring features the Hambro open-web system with poured concrete.

Life Drywall Systems’ contract also  included all load-bearing CFS framing and bracing, the framing for window headers and door frames and the framing for all architectural features, such as the curved soffits, domes and arches. 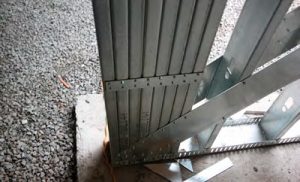 “My field guys are capable of working with CFS, no problem,” says Sliskovic. Life Drywall Systems is a Steel Framing Industry Association certified cold-formed steel installation contractor, one of the first contracting firms to receive SFIA certification. “Not just anyone can work with CFS framing. But, my guys can.”

Life Drywall Systems was also responsible for the gypsum board installation and the Level 5 Finish of all interior drywall surfaces. A Level 5 finish, the highest degree of quality in drywall finishing, features a skim coat of joint compound to provide a uniformly smooth surface.

The architectural details at Burgundy Drive are a standout and were made entirely using CFS framing. They include circular ceiling niches and wall bump outs that create a variety of expansive bay windows. “We were able to shape the steel anyway we wanted,” Sliskovic says. “It’s all laser-straight, so the wood moulding came out perfect.” 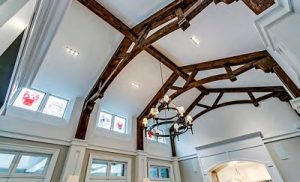 Sliskovic ran a crew of four on the project — himself as project manager and three CFS installers. The crew worked in two phases. They installed the load-bearing studs in the fall 2012 in one month’s time. Then, in 2015, the crew returned to complete the entire interior framing, doing so in three months.

Why the three-year span between phases? The homeowner and his architect worked on a number of changes to the design, Sliskovic says. But once design decisions were final, Sliskovic’s crew worked on site, he says, “with minimal headaches.” The cold-formed steel contributed to a “solid structure,” he says. The CFS studs and track made the job “cleaner,” he says, because the cold-formed steel didn’t warp or twist. That fact is getting plenty of attention in the Toronto-area building community, and the architect for Burgundy Drive continues to specify CFS framing, Sliskovic says.

“We expect to see more residential projects using CFS down the road,” Sliskovic says. “In fact, I’m on my way right now to quote another big job.”

Building Your Most Cost-Effective Mid-Rise Building